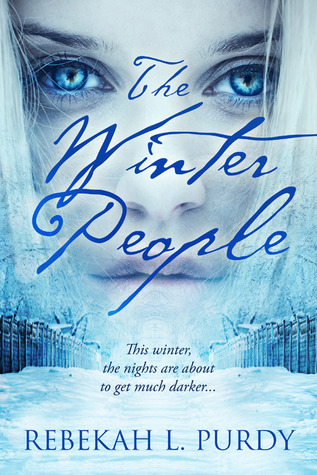 I asked and received this book through NetGalley for free. This review is not sponsored nor influenced in anyway. The book is expected to be published on September 2, 2014

The cover of this book is what caught my attention. It works with the premise that the main character, Salome Montgomery, is afraid of winter ever since, at age 6, she had a horrible accident and almost drowned. Winter for her is also plagued of voices and as she approaches her 18th birthday things keep getting weirder; she sees stuff, voices everywhere, she feel evil is lurking. It is also hinted that faeries are involved and since I haven't really read fairy YA it seemed very appealing to me. The book however left me with a feeling of unreached potential.

I wished this book would've worked the fairy side a bit more. While there are several hints at it and some direct situations, it felt like a backdrop and this was sad for me. Here you have tons of mythology that deal with Fays but most of the book, which is meant to take place along a single year, is dedicated to hinting to the world with only a real bit of it towards the end, so much that I was sure it was going to be a first book of a series...but no.

For the most part I liked Salome and Gareth. But even then, most of the characters could've used a bit more constructing. Again there was a lot to be inferred and that's ok in little doses, but so much was left unsaid that then when things happened they felt out of the blue, for me in any case. Sometimes Salome seemed oblivious of the rest of the world, including her family, which at one point is described as lovely nuclear family and then boom! It is not. I kept thinking things like this would've been developed further in the book (or the series, when I thought it was a series) but they were left hanging, giving a bit to the story but leaving so much potential for character building behind!

I liked that Salome managed to stand up to Colton the moment she notices "changes" on him (hopefully this is not too spoilery for you guys), but the whole love triangle (square?) appears once again there in your face at the beginning and even she keeps saying that ALL of the sudden this is happening. This "all of the sudden" situation was never really developed, which was sad for me, because I kept waiting for the author to explain the significance of her 18th birthday or the Rowan...but I had to look all of those up. Again, a bit of research is fine, but when I am reading my book, comfy in bed and something makes no sense until I look it up it really disconnects me from the story. Off course this could be just me

The end...I liked her decision...but at the same time it felt so abrupt! So in conclusion this was a good book, it was different, made me laugh a couple of times BUT some of the potential (and I saw a lot) was not developed.