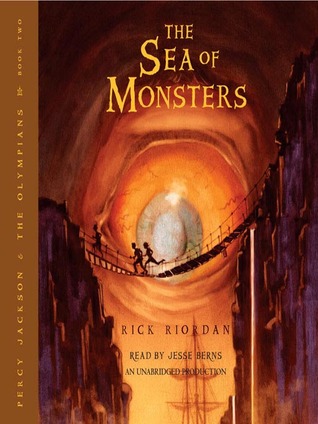 I feel conflicted about continuing this series. As I mentioned on my review for the Lighting Thief, I liekd all the mythology references but I am not crazy about Percy. I think in part is due to the voice given to him in the audio, he sounds way to cocky for a 13 year old. But once again this book has very good usage of Greek mythological creatures and I am liking Annabeth more and more.

So far this series has been way too predictable.  I could overlook, it is not the first book I read that has this issue, and I can still enjoy it, but I think because of all the raving reviews I was expecting too much from it. I think, if I continue the series I will just lower my expectations.

In this sequel Percy goes back to camp Half-Blood after a gruesome attack by monsters on his last day of school. He then learns that monsters attacks have been on the rise and that Thalia's tree is sick. In order to save it someone will have to try and recover the Golden Fleece. Except that this time the quest has been awarded to Clarisse. But you know Percy will be joining somehow or another, don't you?

I liked the addition of Tyson, he is sweet and it was nice to see his interaction with Percy. I found the whole CC spa very funny too.

It's an entertaining series, if not a great one so far. I keep thinking that I should give it a try on paper and not on audio. We will see, maybe the cocky teenager voice will bother me less when he actually becomes a teenager.