It Girl by Nic Tatano 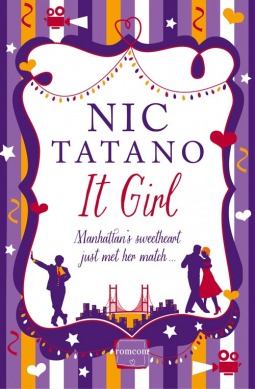 I asked and received this book through NetGalley for free. This review is not sponsored nor influenced in anyway.


What the book is about

The book follows Veronica Summer, a NYC TV journalist that gets the chance to become the new face of the morning show and though this eventually get her dream job as the evening news anchor. As hard as it is for her to be upbeaty and smile every morning, she tries her best, until one day her snarky personality takes over...and people love it. Then the unthinkable happens, the network wants her to be part of their successful show Dance Off (similar to Dancing with the Stars) where she will have to work with an insufferable British judge that might be as snarky as she is. Will she be able to maintain her credibility while dancing the night away so she can finally get her dream job?

This book as a Romantic Comedy and for me it falls in the same lines than the Shopaholic series, which unfortunately made it very predictable even though Veronica is very different (behavior and personality wise) to Becky from such series.

This was a fun light read, but for me it didn't bring anything new to the mix. This made the things that bother me become ever more present.

So let's break the story down, shall we? Veronica is very opinionated and direct, that was nice to see in this type of character, she is not a "damsel in distress", she has a nice career and she is proud of it. The scene with her boyfriend were she puts her foot down about getting her career opportunity was pleasant to read, her being assertive and putting herself above the idiot that was forbidding her from advancing in her career. But then she goes, a couple of pages later she goes and says: "he gave me a strong hug and almost lifted my hundred and thirty-five pound off the floor". I have never, ever heard any person refer to herself regarding her weight in such a sentence; and she kept having sentences like that which made her for me very caricature like.

Regarding caricatures, she has a friend Savannah described as the "sultry Southern brunette" of the group...and for some reason, this Savannah is incapable of saying you; no, she will only say y'all, even when it is a singular you...again, this would be a small thing if it wasn't in every sentence uttered by the character. This type of dialogue building made it hard for me to dive into the story, also since at sometimes where the you is supposed to be singular, it made the sentence I was reading very awkward, and I would have to go back to it to make sense of what she was supposed to say.

Finally, the thing that made me itch the most, and I know this is just because of my science background, is as follows: one of the characters gets an allergic reaction and says: I'm sorry I need to get my vaccine...I think the author was trying to avoid repeating the word shot in the same paragraph, but a shot and a vaccine are not interchangeable terms, I am sorry, they are just not.

I think the book is entertaining for a very light, summer evening. The characters were not complex and are in general enjoyable, give or take certain clichés that I'm coming to think are unavoidable when writing this type of story, since I see them almost every time I read this type of books.

As I mentioned, the story and the ending are a bit predictable. The thing that made me take it from 3 to a 2/5 was that at the end (spoilers ahead) since it is her that ends up giving up her dream to follow the guy. Off course at the end she seems happy, I am sure she feels happy. But it was never even an option that HE would give up, or to find each other in the middle. I don't know guys; I think I am not longer the audience for these girls that throw everything as long as the guy is happy, particularly when at the beginning of the book the main character is portrayed as very career oriented. It makes me feel like the message is: oh, is just a face, once you meet the right guy, you will change your mind...I just can't.