Spinster: Making a Life of One's Own by Kate Bolick 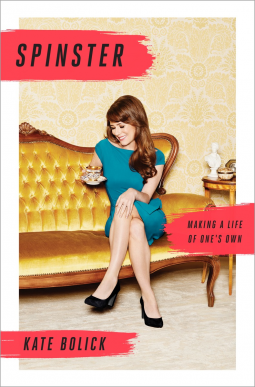 I asked and received this book through NetGalley for free. This review is not sponsored nor influenced in anyway. Thanks to Thomas Nelson Fiction for the book.

It’s hard to say which is more exhausting: the sheer arbitrariness of knowing that her one true love could appear out of anywhere, anytime, and change hr fate in an instant (you never know who is around the corner), or the effortful maintenance (manicures, blowouts, bikini waxes, facials) that ensures she’ll be ripe for the picking when it happens

These words, set in the very beginning of the book caught my attention and with it set the tone for a book that I thoroughly enjoyed. I was afraid that the book might be a book dedicated to throwing marriage out of the window as just “bad” and how glorious it is to be single, and nothing else. I was very happy to see that Bolick, does not make it sound like being single is the only way, or that women deciding to marry have it wrong or viceversa. Rather it is the telling on how she came to find what worked for her, her inspirations, her questioning on why the connotation of single hood on a woman is immediately associated with “something missing” or why the term spinster has such bad association. Based on her own life experience, Bolick gives a very interesting view on being single for the long term.

Why is it that there is so much pushing to get married? The whole industry behind weddings, engagements and at the end, marriage sometimes feels overwhelming. Instead, in her book, Kate Bolick talks about wonderful women who were amazing on their own, and at the same time tells the reader how she got to a point on her life where she is perfectly comfortable in her skin, as an unmarried woman, and why, shall it be your decision to do so, you should be perfectly fine with it too.

While women have come a long way in a lot of accounts, it would seem that the idea of you always needing someone else is almost inevitable. Not so much if you area man, although I have seen the pressure on both sides. The idea that you can be happy without being in a couple still feel foreign and somehow, unrealistic. This book make me think so much about single hood, which sometimes felt weird, considering I’ve been in a relationship for more than 5 years now and we are presently engaged. But, the question that kept coming as I read this book, was: Would I be fine if for some reason we break up? Well, off course I would be sad, but I would be ok. Even more telling was realizing how many of my friends might not be, if they would become a “spinster”.

Bolick doesn’t spend the book talking about the evilness of marriage, or even being in a couple. She has been part of a couple and has been happy in it, but she mostly shows how it is perfectly possible to be equally happy being single. With splashes of the rest of her life such as the death of her mother, the big move to New York, and a huge break up, she tells her journey as it is: the journey that took her to love her single hood.

As with any big part of one’s identity, the idea of being single and what it represents changes through her life, and that was probably one of the things I enjoyed the most in the book: how her perspective changed and grew as different moments in her life were taking place and as she met her inspirations. I learned of women I had never heard of, women who were comfortable with themselves and loved their single selves.

I would recommend this book to almost anybody. The only reason I didn’t give it 5 stars is because it can get very academic some times, and hence a bit heavy in certain passages.