Girl of Nightmares by Kendare Blake 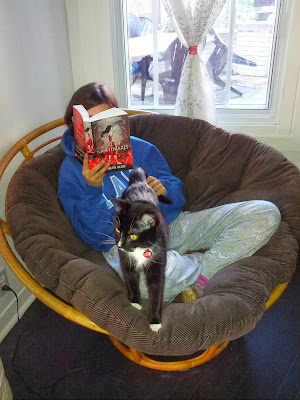 Why I read this book?

Last year I read the first book of the series and really liked Blake's style. I waited for the paperback to be available, to add it to my collection. It also makes part of my R.I.P VIII challenge, as well as my Sequel Challenge. Also this is the first book I've ever bought from the Book Depository!!

What's the book about?

As we saw in the first book, Cas has lost Anna; she saved his life. But Cas is sure she is still around; he sees her, once in a while but in the most inconvenient moments, including when he is trying to get rid of more ghosts. When looking for an answer he will learn more about his atame and his own role in "cleaning" the Earth of lost souls.

What about the main character?

Cas didn't change much between books, and this is a good thing. He kept his bitter humor and his loyalty to friends, while remaining a bit smug about himself. I liked that in this book he seems a bit more fragile without turning weak.

The thing I liked the most about this book was the back story of the order; learning how and why the Atame was made and about Cas's father role in all this was interesting. I also enjoyed seeing Thomas character grow a bit more, both as a witch and as a friend. The change of scenery was nice too, but I wish Blake would've exploited this a bit more; sometimes while reading a part that was settled in London, the lack of descriptions made me come back to the US inevitably. I am a person that enjoys full scene building.
I didn't particularly care for Carmel in this installment of the story, I liked her better in the first book. As for Anna, I wished she would've had a bigger role in the book just because I enjoyed her so much as a ghost before.
In all it was a good closing for the story, an entertaining read, not to light, not to heavy. I would certainly recommend this book for everyone who enjoyed the first one.